It is generally accepted that a Miniature Quilt is no larger than 24” x 24”. If pieced, the blocks cannot exceed 4” on its longest side.

Just as important as its overall size is its scale. A Miniature Quilt should be a scaled down version of a larger quilt. When photographed, it should resemble a large quilt. All of the various components: overall design, quilting design and stitches, binding, embroidery, embellishments, or other surface techniques need to be reduced in scale.

Either way, it is clear that a true Miniature Quilt is not merely a small quilt. Here are “My Mini’s”.

1 US Quilter + 1 International Quilter + A Passion for Quilting = A Priceless Experience!
Team #376

Through this International Miniature Quilt Exchange, hosted by The Quilt Show a new friend in Lucja from Poland and returned to my quilting roots. I’ve quilted for over 40 years. Lucja is relatively new to quilting.  Inspired by the purpose of this exchange, we choose a simple traditional Friendship Star theme for our challenge.

For me, the challenge was to make this traditional pattern ‘new’. By changing the background fabrics in selected sections of the scrappy blocks, a large friendship star shines bright amidst the 36 smaller ones. Born on Flag Day, I made my quilt subtly hint of the American Flag with blue stars in the upper left corner and alternating rows representing red. A thin printed ‘braid’ border separates the stars from a piano key border and fussy cut flowers fill each corner in honor of Lucja’s love of flowers.

My quilt is machine pieced and quilted. A tiny stipple solidifies the large center star from which lines radiate. A simple vine of flowers and leaves winds its way across the piano keys.

Through emails, like pen pals of old, we shared from our hearts about our lives and our families. If distance didn’t separate us, I think Lucja and I would be even closer friends. Her gorgeous flower gardens make me want to dig alongside her in the dirt and I’d love to help her grow her love of quilting. 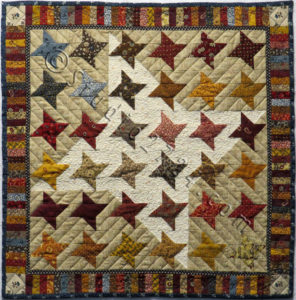 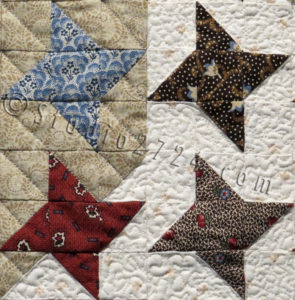 (…and in exchange, I received this gorgeous, bright, cheerful friendship star quilt with a modern twist to which Lucja added an element of Polish Culture, a fabric with a motif of Polish “folk łowicki”. I will treasure it always!) 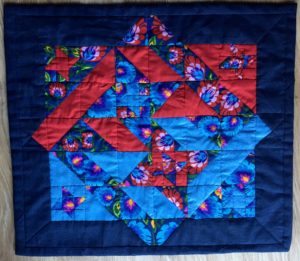 While it may seem to be a paradoxical to call a quilt constructed of Civil War reproduction fabrics “Modern”, the simple blocks and overall design are definitely modern. 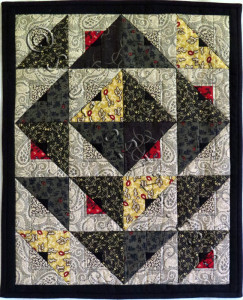 Currently available for purchase. See Quilts and such Tab.

Winchester’s War  (10.75″ x 9.5″)
Designed, pieced and quilted by Sue Hickman       Berryville, Va       2/2012
An Historical Reflection on the pivotal role Winchester, Va and the surrounding Northern Shenandoah Valley played in The Civil War. These 72 Blue and Gray Xs represent the 72 times the city changed hands, South – North and back again under confederate and Union control.

This quilt showed at the 2013 Northern Shenandoah Valley Quilt Show, held in Berryville, Va and won the First Place Viewer’s Choice Award in the “Miniature Category”. 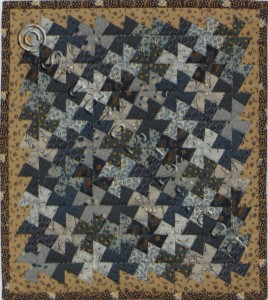 Contains 169  1″ finished squares in the center trip around the world. 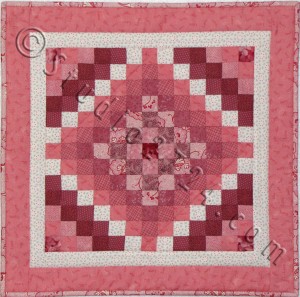 This quilt gets its name from the Railroad Crossing blocks for where, on July 21, 1861, near the Manassas, Virginia railway junction, the first major battle of The Civil War took place. This First Battle of Bull Run was named for a stream that flowed across Wilmer McLean’s field where battle yielded a Confederate victory.

Interestingly, less than four long years later, on April 9, 1865, Gen. Robert E Lee surrendered to Lt. Gen. Ulysses S. Grant in the parlor of McLean’s farmhouse in the community of  Appomattox Court House marking the beginning of the end of the war.

No, these two events did not occur in the same place. Wilmer Mclean had moved after those initial battles to make a new home in Appomattox Court House.

This quilt showed at the 2013 Northern Shenandoah Valley Quilt Show, held in Berryville, Va and earned a Third Place Viewer’s Choice Award in the “Other” category. 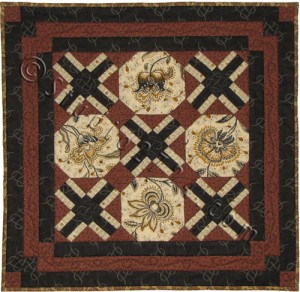